Woohoo! Three more days left until the Vancouver 2010 Winter Olympics! In honour of this spectacular event, I have created a manicure featuring one of the mascots: Miga the Sea Bear!

For the manicure, I applied three coats of Rescue Beauty Lounge Bikini Bottom and OPI Gargantuan Green Grape over Essie Marshmallow. I love how these polishes create a soft and watery effect when layered together. I topped off the mani with China Glaze Fairy Dust for an extra holographic sparkle! Miga was painted with a whole bunch of polishes including Wet N Wild Black Creme/ French White Creme, Misa Be My Lover, Orly Mint Mojito, Essie Shelter Island, and OPI Osaka-to-Me Orange. ^-^


About Miga (from the official website): Miga is a young sea bear who lives in the ocean with her family pod, beyond Vancouver Island, near Tofino, British Columbia. Sea bears are part killer whale and part bear. (Miga is part Kermode bear, a rare white bear that only lives in British Columbia.) 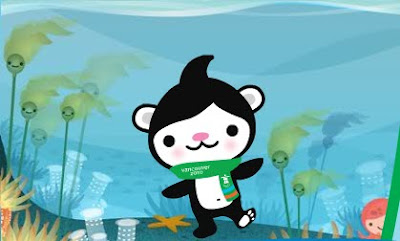 I can't wait until the Olympics! Even though I'm not going to any of the events, it's still extremely fascinating to live in the host city and have people from all over the world come to town! I'm going to have all my Olympic gear ready and attend the torch relay on Friday! Teeheehee! XD So are you ladies excited for the Winter Olympics? Any events that you're looking forward to watching? = )
Posted by Wan at 4:30 PM
Email ThisBlogThis!Share to TwitterShare to FacebookShare to Pinterest