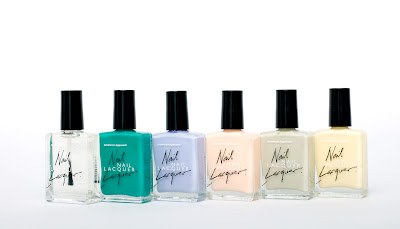 I just received this press release from American Apparel and can not wait to share this with you guys! I picked up a few shades from their original collection and absolutely adore them. I'm really looking forward to these new summer colours especially the green! I can't wait to see pictures of swatches! =)
LOS ANGELES -- American Apparel (Amex: APP), the vertically integrated clothing manufacturer based in downtown Los Angeles, is announcing the addition of six new colors to its successful line of nail polish. The company timed and designed the expansion of American Apparel Nail Lacquer for the upcoming summer season.The colors continue the theme of representing the brand and the culture which surrounds it. A khaki shade called "California Trooper" alludes to the uniforms of the ubiquitous California Highway Patrol, while "Malibu Green" is inspired by the colors found near the company's store on the historic Pacific Coast Highway. Other colors like "Summer Peach" and "Butter" are now also an available option for some of the company's classic garments, including the Pique Tennis Shirt, 4-Way Stretch Side Zipper Pants and Dov's Hoody. The line will feature the release of a base/top coat, a much-requested addition that will bring an extra layer of protection and gloss to the nail lacquer.

"The first 18 colors of our nail polish line were an experiment˜we picked colors that were beautiful and didn't set out to necessarily match them with anything. For summer, we saw an opportunity not only to add a few new colors, but also to develop some fresh shades that can coordinate with the tones of our new styles. We're proud that by listening to the feedback of our employees, customers and the online community, we were able to create a summer range that incorporates their ideas and expresses the palette we presented this season," said Marsha Brady, a creative director for American Apparel.

American Apparel Nail Lacquer has been an exciting success for the company as it has expanded its aesthetic into new areas and styles. The initial run of 18 colors and 50,000 bottles quickly sold out worldwide and developed a loyal following of fashion bloggers and polish artists. By working with a California manufacturer near its headquarters in Los Angeles, American Apparel continues its commitment to the idea of Made in USA polish and hopes the new colors will be met with the same glowing reviews.

"The public has had an overwhelmingly positive reaction to our nail polish collection and we're excited about these new additions. As we translate our basics model to fashionable pieces and new kinds of products, we remain dedicated to maintaining the same level of quality and dependability that we're known for. The colors have the potential to enhance outfits in both classic and atypical ways and we're really look forward to seeing how people wear them," Brady said.

American Apparel Nail Lacquer is priced at $6 per bottle and is available in a 3-pack for $15. It is sold at American Apparel stores worldwide as well as online. The nail polish is DBP, toluene and formaldehyde-free. The full color range, ingredients and photographs can be found in the American Apparel web store.
Posted by Wan at 10:10 PM
Email ThisBlogThis!Share to TwitterShare to FacebookShare to Pinterest